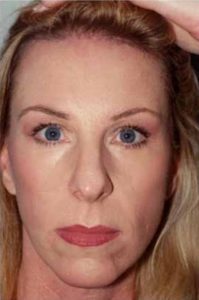 Pretrichial Brow Lift – Preoperatively, this woman had eyebrows that were low enough to give her an angry appearance. She had a high forehead in which she wore bangs to cover up. A forehead lift relieved the angry appearance. This was done by a pre-trichial approach using an incision right in front of the hairline. One can see where her hair is raised that there is minimal appearance of the scar and her forehead is not so high postoperatively. In addition to a brow lift, she underwent transconjunctival lower eyelid blepharoplasty and full-face CO2 laser resurfacing.

View all posts by David